Hugh is a barrister who has specialised in aviation regulatory, corporate, commercial and competition law for over thirty years and is recognised as one of the most experienced and highly respected aviation lawyers in the UK. Over this period he has gained extensive experience in private practice as a barrister, as well as heading the Aviation Regulatory and Commercial practices of three international law firms.

He has acted for an extensive number of airlines, airports, regulators, governments, investors, financiers and travel companies. Hugh’s practice is international and he has acted for such clients around the world, including advising governments and regulators in Africa, Asia and elsewhere on the development of national civil aviation policy and regulation. He has advised on a number of airline start-ups, restructurings and strategic initiatives.

As a barrister Hugh has rights of audience in all national courts and tribunals and he has also appeared at hearings before the UK Civil Aviation Authority and the European Commission.

Hugh is a trained and experienced mediator and has sat as an arbitrator in aviation-related disputes. 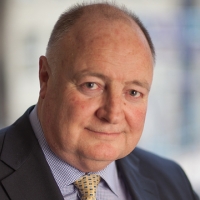 The “fantastic” Hugh O’Donovan wins praise from commentators for his focus on aviation regulatory issues, with strength in multi-jurisdictional matters. “I have always found him to be clear in his explanation of the issues and what the options are,” says a source. Chambers UK 2021

Hugh O’Donovan of Keystone Law is regarded as a leading aviation practitioner hailed by market commentators as “the regulatory king.” Clients appreciate his ability to “make difficult concepts easy to understand.” Chambers UK 2019

Hugh O’Donovan of Keystone Law enjoys a healthy reputation for his regulatory expertise. He applies his jurisdictional knowledge to a broad range of transactional matters and disputes in the UK, the EU and further afield. A client says: “For me, he is one of the best aviation regulatory lawyers in the world. He has sound technical knowledge, but can temper that with an understanding of the client’s commercial needs.” Chambers UK 2018

Hugh O’Donovan is named as a leading individual for Aviation in Legal 500 2017. “Fantastic reputation”

Hugh O’Donovan of Keystone Law is widely acknowledged by commentators as a force in the aviation market and “a brand all of his own.” Widely acknowledged as “one of the top lawyers for regulatory work,” he offers advice in a range of matters, including in the development of national aviation policy. Chambers UK 2017

Hugh has been consistently top-ranked in the leading legal directories including Chambers and Partners and Legal 500 for many years, being variously recognised as a “doyen”, “a great industry specialist”,“outstanding”, “vastly experienced and practical”, and having “fantastic breadth of knowledge” with “decades of experience and an encyclopaedic knowledge of industry regulation”.

Clients say Hugh O’Donovan is “an outstanding lawyer in his field with a tremendous track record and experience. He is extremely intelligent and always gets straight to the point”. He specialises in commercial, regulatory and competition law. Chambers UK 2016

Hugh O’Donovan has “a wealth of valuable expertise”, and heads the commercial aviation team. Legal 500 2015

Hugh qualified as a barrister in 1975. Prior to joining Keystone Law in 2016, he worked at the following firms: